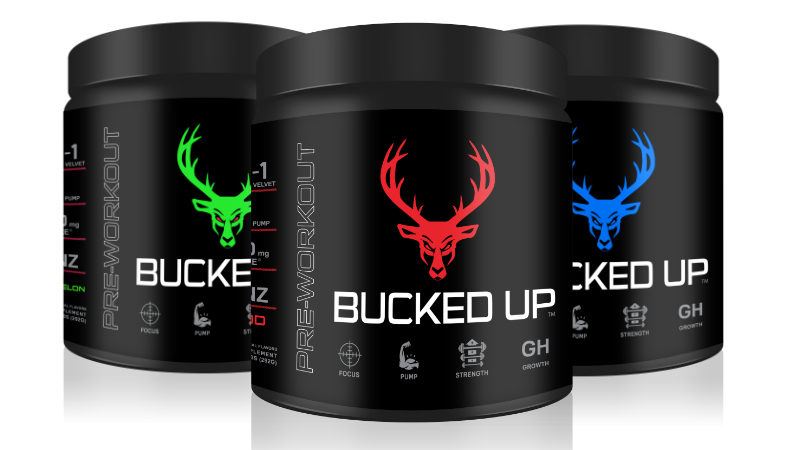 Bucked Up: FROM ONE CAME MANY

Although the pre-workout supplement Bucked Up has been around for several years now, there are those of us who still remember a time before its conception. How could we possibly forget? I’m still haunted by thoughts of all the gains I could’ve had if Bucked Up had existed in my early lifting days.

They were dark days. The crack equivalent formulas such as (old) Jack3d and Superpump 50 had long since been banned, and the other house brands had yet to fill in the abysmal chasm left behind. Everywhere I looked, seeking a supplement I could rely on, I only found despair, disappointment, and malcontent.

That’s saying something, considering I worked as an assistant manager in a supplement shop and had access to any supplement my young -addicted heart desired. As an investigative nerd with an insatiable need to grow, I’d already stocked up thousands of hours researching supplementation. You’d think this would’ve made it easier to find a solid product, but it was quite the opposite. Ignorance is bliss, and ignorance was a characteristic which I significantly lacked (at least in this field). This made searching for the holy grail of pre-workouts nothing short of infuriating.

This was back when non-proprietary blends — a way companies can hide what dosages they’re using for key ingredients — were popular. As such, buying any pre-workout was at best a financial gamble, but more commonly a game of Russian roulette. Countless times I’d try some new popular pre-workout only to end up with any one of the following experiences

My boss — better known as Jose Reyes or that cocky, stylish Bucked Up guy — and I wasted hours grading and critiquing pre-workouts, then discussing flaws in their formulas…okay, that’s a lie. He pointed out where they went wrong and I occasionally chimed in with a witty comment. Then we casually wrote down formulas we wanted to see. It was almost like a Heisenberg origin story. Just without drugs or cancer or anything that exciting.

Little did either of us know that change charged in from the distant horizon.

Not long after, some brilliantly business minded individuals who’d done well with the recovery giant, Deer Antler Spray, found Jose. The rest is pretty much history. Jose came up with the formula for the OG Bucked Up. With Ryan’s business brilliance the company grew and grew into the supplement force it is now.

What made Bucked Up so popular?

It could have been any number of things, really.

Who really knows; we all have our preferences. What is well-known by now, though, is that Bucked Up is by far and wide one of the best pre-workout supplement on the market today — only rivaled by its successors, WOKE AF and BAMF.

Bucked Up is one of the few pre-workouts that works for experts and beginners alike. This is because it wasn’t just formulated with one single individual in mind. It was created strong enough for the powerlifter howling at the moon before a set as well as the nineteen-year-old kid just wanting to shed their “freshman fifteen”.

The Bucked Up Formula

The reason Bucked Up pre-workout supplement is able to accomplish this feat is either due to its really cool label, or its quality formula. But, since I know nothing about labels, I’ll explain how each ingredient helps you transcend an okay workout to an epic one.

Lifting the Veil of Supplement Myths

Have you ever taken a pre-workout that provided crazy energy the first few times, but then lost its effectiveness about 14 servings in? Did you start double scooping to chase that same ‘first time’ feeling? Or maybe you craved it so much you drank a double espresso alongside your double scooped pre-workout after eating an In N’ Out double-double and Gatorade hoping that all the carbs might just mimic that rush? Ummm…yeah, me neither. I’m a responsible adult too. I swear. At least, now that I have discovered low carb lifestyle I am.

How about after you finished the worthless tub; when you went back to the sales rep at your local corporate supplement store did they feed you the line: “Oh yeah, bro. You just gotta cycle different pre-workouts otherwise your body gonna build up an immunity and stuff, bro. It’s science, trust me on this.”

The only time this is true is if its a medical condition. For example, double scooping a poor quality pre-workout means you’re getting 700mg of caffeine daily, consequently would lead to adrenal fatigue (which is bad).

Other than the outlier though, the statement “Your body builds up an immunity to pre-workout; the only way to work around this biological conundrum is to cycle through different pre-workouts” is a lie. And not even a very good one.

A pre-workout supplement formulated with quality ingredients at clinical dosages will, on a biological level, always work the same (unless something in your own body changes). Caffeine does not suddenly change its chemical makeup after fifteen days. Citrulline doesn’t transform into Pixie Sticks sugar after five uses.

The reason we are led to believe this is because most pre-workouts honestly, just suck. Many companies put a proprietary blend together without telling consumers any dosages aside from the caffeine content (only because they want us to see the most recognizable ingredient is heart attack high) all while paying little attention to silly details like clinical studies and dosages.

Bucked Up isn’t about that life though.

Bucked Up will consistently provide you with the same benefits it did the first time around.

If you like gambling with the quality of your workouts (and therefore your results), be my guest. Just don’t try and convince me to sample that new bottle of house brand stuff you just purchased. I crave results and constant growth. That’s why I’ve supplemented with Bucked Up pre-workout supplement for five years, and why I’ll be saying the same thing come another five.

Go to buckedup.com and start transcending gym complacency now. See one example of how to transformed someone’s body by reading this article.