In this week’s transformation, we will be highlighting Jordan Brooks.

Listen up, because this dude knows what it’s all about.

Tell us about your transformation and what inspired it.

Back when I was in high school, I worked out when I played football around 2008 but I didn’t take it too seriously. When I went to college, I never had time to work out but I promised myself that I would dedicate my time to fitness after I graduated. I started that promise to myself one month after I graduated in 2014.

Now, six and a half years later, here I am.

What was your goal? How did you reach it?

My goal was to become strong. I knew that once the strength came, everything else would fall into place. From the start I just aimed to be as strong as I could be. I made sure that I did things right, worked hard, and educated myself to maximize my results. I was right. Everything else fell into place: the size, the muscle, the weight gain. I’m glad I did things the way I did.

What was your biggest obstacle and how did you overcome it?

At the start of 2016 though the middle of 2017, I worked for a touring children’s theatre that required one other person and myself to drive to a different location every week teaching children how to put on full length musicals. The big problem with that was that I still wanted to continue working out.

So, every single week I can proudly say that I found a different local or commercial gym to get a week or a few day passes at to continue working toward my fitness goals.

That was a huge hurdle, and it would have been so easy to give up, but I did not.

Why did you choose Bucked Up?

A former colleague of mine suggested it after expressing my frustrations with ProSupps not doing the job anymore. I took the leap and never went back again.

How has Bucked Up helped with your journey?

This switch to Bucked Up was around six months after I permanently came back home after working the touring children’s theatre job. I was around 175lbs and all that work previously was basically maintaining rather than progressing. Bucked Up put me into overdrive and I was able to surpass previous goals and even gain more to make it up to around 200lbs. 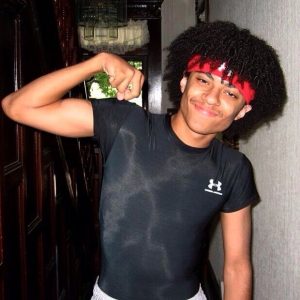 What makes Bucked Up different from other supplements you have tried?

Bucked Up gave me that extra kick that I had previously lost with other products.

Also, let’s face it: most supplements are expensive. These were reasonably priced, and that’s one of the things that keeps me coming back.

What do you do for motivation?

Having a routine helps immensely. I would come home from work, change, mix up my pre-workout stack, and go straight to the gym. Knowing that’s just what I do following work helps it become part of my life.

The pandemic kind of threw a wrench in that, but instead of going to the gym (they were shut down for a few months here), I just did my workouts outside. It was harder to break my routine, so I just still did my best to work out.

What are your favorite Bucked Up products and flavors?

I think it would just be easier to name my whole current pre-workout stack It consists of the following:

What was the one thing that most impacted your success?

It was a combination of doing the proper research to ensure that I was doing movements correctly (both to prevent injury and to maximize gains), AND…

Making sure I dropped some ego to listen to criticisms from people I trusted. As a result, I was able to fix some mistakes I was making during those key points in my fitness journey.

Any advice you’d like to give to people looking to start their own journey?

Knowledge is power. Do some reading or watch instructional videos then record yourself and compare.

Going into this with some knowledge gives you a leg up and the confidence to make whatever change you want to make.