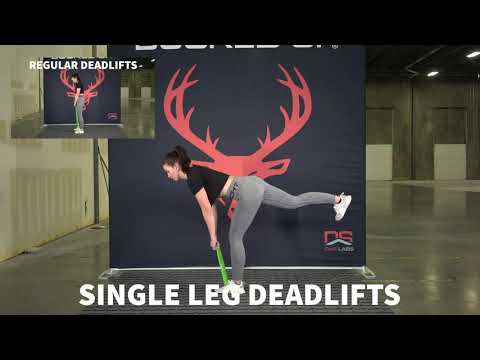 This article is for anyone needing another full-body workout to do from home, using resistance bands. After all, there’s no such thing as having too many exercises to choose from!

I will break down each exercise that the video’s model, Jessi Kate, performed, so you can give this workout a try next time you’re feeling experimental.

What To Expect In This Full Body Workout Article

And for those of you who have access to a gym, after I provide the step-by-step for the video exercises, I will show you how to implement any one of these exercises into a regular gym routine.

Incorporating some resistance band exercises (or bodyweight exercises) is an effective way to take a working muscle beyond failure — where the real growth happens. Plus, it gets more blood pumping and that’s always a net win. But first, you need to know how to perform each exercise. As such, we’ll start there.

The in and out jump squat is a great lower body exercise for improving power and coordination. It targets the quads, hamstrings, and of course glutes. Additionally, because of the jump, this works the calves.

Integrating a resistance band into the movement adds a level of difficulty since it brings an extra component with having to control against the band when moving the legs in, and extra force when moving the legs out — somewhat like a hip abductor machine. As an added benefit, the resistance band can improve knee stability, which is optimal for those who find they have a tendency to let their knees “bow” in during traditional squats.

Modification: don’t jump: Performing this modification won’t take much alteration. Instead of jumping at the top, come up onto the balls of your feet as if you were doing a calf raise.

These are one of those deceptively challenging exercises that many men and women have mistakenly scoffed at, but they’re no joke — both in difficulty level and effectiveness. In general, unilateral movements are beneficial in that you’ll target each side individually to strengthen both sides — as opposed to a “strong” side picking up slack.

On top of targeting the hamstrings, erector spinae, and glutes, they also require stability muscle recruitment to a large degree. Which is one reason why they’re great for at home, since the only witness to your potential imbalance would be that dog that refuses to let you workout in peace.

Adding the resistance band increases the level of difficulty since you’ll feel greater resistance and stretch in the bottom portion of the movement, as well dealing with a more unstable environment — fitting for 2020.

I will explain how to perform the single leg deadlift using your right leg as the support, trusting you can figure out how to apply the steps for your left.

Modification: Deadlifts: Apply the same concept of holding the band overhand grip in front of your thighs. The band will be looped around the soles of both feet. Keeping a slight bend in your knees, slowly bend at the torso and drive the hips back, until your body is either parallel to the floor or you can’t imagine stretching any further. Feel the stretch. Return to starting position.

As an additional modification, should you still want to perform the single leg movement, but haven’t built up to the necessary stability, you can place one hand on a post or anything of the sort — significant others can work nicely — and perform the exercise using them as balance (i.e. effective codependency)

The curl to press exercise is a functional exercise used to improve strength in both biceps and deltoids. This is especially good for those who find they have trouble with dumbbell presses because they can’t effectively get the dumbbells into the starting position (e.g. in a dumbbell military press, the weights start off on the thighs and need to be powered up to the starting point).

They’re also a useful tool when wanting to hit more muscle groups in a short period of time. The resistance band is effective for recruiting more stability in those small muscles around the deltoids (e.g. rotator cuff) that so few of us directly train. To perform them is simple:

Modification: Curl To Press without a band: Do this primarily to warm up and get familiar with the movement. Alternatively, if you just want to switch it up while still utilizing the band, do: 8 curls followed by 8 presses, then ending with 8 curl to presses.

For those with access to dumbbells and whose goals are hypertrophy (muscle growth), do the military press and curl in a super set fashion, starting with military press, going to failure, then switching to curls (can be done with barbell or dumbbell.

I know. The video calls them bridge rows. They’re actually alternating plank rows (or commando rows), I’m just passive aggressive…and it was already loaded onto Youtube, so yeah. There’s that. Anyway, the alternating plank row is one personal trainers commonly have their clients do because it’s a way to improve core stability while also developing some back strength.

The benefit of using a resistance band instead of kettlebells or dumbbells is, for one, if you’re reading this, it’s probably because you don’t currently have access to either of those pieces of equipment. The other benefit is that when using kettle or dumbbells you will either have to balance on the equipment or pick them up each time. Although both of those practices can be effective (either for wrist stability or agility), they can prove too difficult for some. Here’s how to perform the alternating plank row, using a resistance band.

Modification: Alternating Plank Rows (off the knees): This doesn’t need an explanation.

Same Exercises Applied As Supersets In The Gym

Some of you have access to a gym or at least some weights. Congratulations. Here’s a way to increase the difficulty and intensity of your current workout using the above listed exercises. In table format, because Google likes those, and they allow me to believe I learned how to use Excel Spreadsheets.

I have access to a gym, but can only go 2-3 times a week. What should I do? You should make sure to get the most out of those few workouts. Set up your schedule so that you’re never training two days in a row. Instead, focus on a simple two step process: Tear then Repair. Check out this article if you want to make the most out of your busy schedule.

How can I avoid losing muscle mass when I don’t have access to a gym? First, accept that you might not be building as much muscle as you’re accustomed to. Maintaining muscle mass without a gym is very feasible, with the right supplementation and a wealth of knowledge. I can help with the knowledge part (click here), and to shortcut your way to a supplement that works as a guardian against losing muscle, let this link magically teleport you to the supplement doctors have complimented — it’s also gained a bit of a cult following (no Kool-Aid included)

2020 has me feeling down in the dumps. Are there any foods that can improve my moods? Despite what we’ve been led to believe by our prescribe-first-(mis)diagnose-later society, proper nutrition, exercise, and supplementation can provide major benefits, including sorrow induced apathy. Check it out.