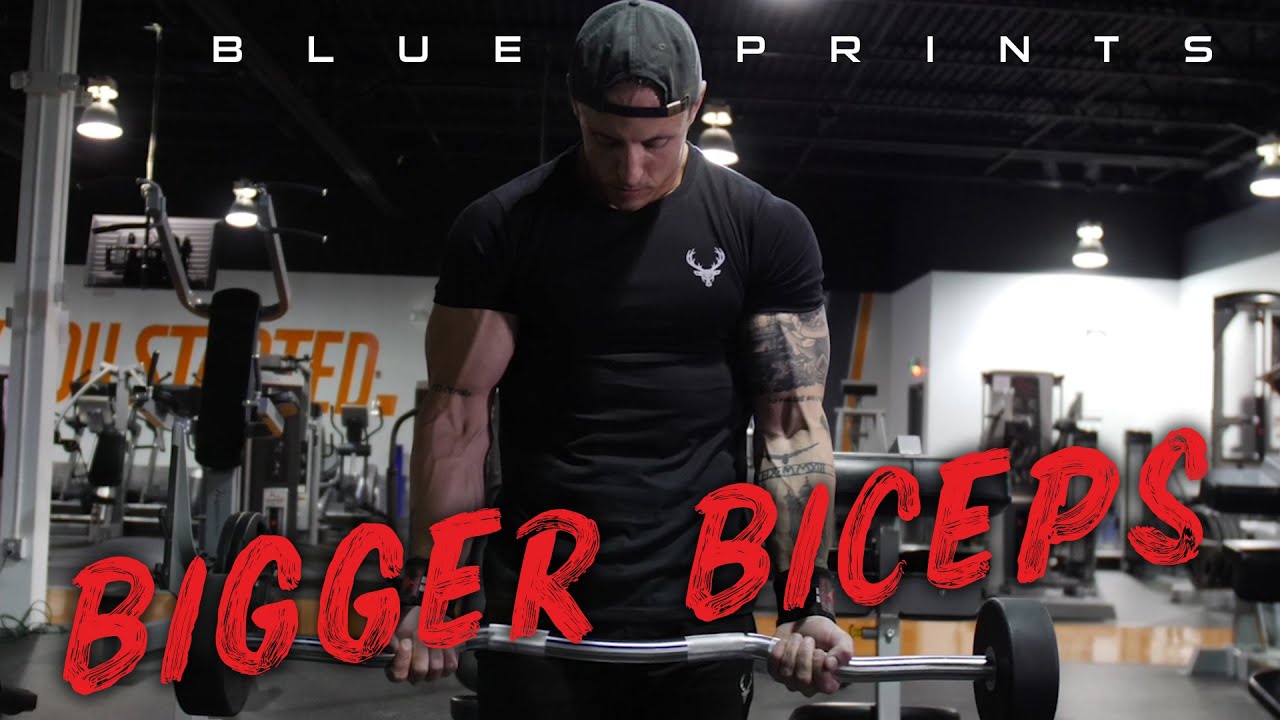 If you want to build bigger biceps, then this article is for you. And if you don’t want bigger biceps…what are you doing with your life?

I’m pretty sure I’ve never met a lifter who hasn’t yearned to stretch his sleeves or a girl who wouldn’t benefit from adding more shape and definition to her arms.

Where most lifters go wrong when training biceps is in their approach. This can be anything from a lack of intensity, too much volume (or not enough), etc. Among the most common is neglecting the details, though.

Devil is in the Details

The “devil is in the details” is an idiom that refers to a catch or mysterious element hidden in details, meaning that something might seem simple at first glance, but actually requires more effort, time, or research.

When it comes to biceps, seek out that devil and invite him/her to coffee, because the details are what will transform your biceps from merely attractive to sinfully seductive.

You think I’m kidding. I am. Well, kind of. I’ve had people of both genders hit on me (typically at fitness expos), and admit the thing that caught their eye was my biceps development. Okay, maybe that’s not sinfully seductive, but it’s a start. The way I did this is simple — mindset.

As far as I’m concerned, big biceps aren’t enough. I want more. I want them to be perfectly sculpted. (My biceps might not be there yet, but hey…we’re always a work in progress.) The only way to do that is to pay attention to key factors such as anatomy, angles, and how to set up a routine to effectively target the following areas of the biceps:

Once you can apply this knowledge and target effectively, who knows. You might become a target yourself.

I’m sure a lot of you already know the anatomy of the upper arms, and If you don’t, you’re about to learn.

Each head of the biceps — and the brachialis — add a different quality to the appearance of your upper arms. We’ll go over each of their visual properties, as well as what exercises best build them. Then we’ll put together a routine.

When seen from the side, the long head gives the biceps a nice shape, especially near the bottom portion/ underbelly. It also plays a critical role in adding that peak (bump) on the upper arm. Unless you want your biceps to look like little molehills when you hit a pose, work that long head.

Ladies, believe it or not, this applies even more so to you. You might not be hitting biceps poses often, but you have arms. If you want shapeless string beans, you do you.

But if you want a clean-cut between your delts and your biceps, then you need to hit your long head. Plus, a peak is just as sexy — I mean cute, sorry — on girls as it is on guys.

Incline Curls: Once upon a time, I believed that incline curls could lengthen my biceps due to the stretch I’d feel at the bottom half of the repetition. I’ve learned a lot since then. Like, you know, basic anatomy. You can’t change where your biceps attach. Good news though, these are a powerful exercise for building the long head of the biceps, which can make your biceps appear longer than they are.

Note: If you have shoulder issues, this exercise is not for you. Because of where the long head attaches in the shoulder, the stretch you feel when performing incline curls can be damn near excruciating (if previously injured), and worse, put you further back on your road to recovery. But, for the rest of you, curl away.

Spider Curls Narrow Grip: Another of my favorites. This isolates the biceps like crazy, taking the brachialis completely out of the movement. It can be done with a barbell, cambered bar, or dumbbells. Experiment and see what works best for you.

Lay face down on an incline bench (adjusted to a little steeper than 45°). Holding the bar at full extension, your arms should be straight up and down. Without letting your elbows drift back — seriously, stop that — curl the weight up until it’s practically touching your front delts. Slowly perform a negative. For some extra fun, throw in some partials at the bottom half of the rep once you’ve hit failure on full ROM (range of motion).

When relaxed and seen from the front, a well developed short head rounds out the biceps and adds a clean separation between elbow and attachment. When flexed, it looks like you have a magical orb brimming with arcane energy under your skin. Sure, a gun show is cool, but a gun only has so much potential power. A magical orb on the other hand…

Females, I know (most of) you don’t want massive inner biceps, but keep this in mind: the likelihood your arms blow up isn’t high. Targeting the short head won’t make your arms “bulky.” What it will do, however, is add definition to the inside of your upper arms.

Wide Grip Barbell Preacher Curl: Realistically I could have just given you this exercise and called it good. It’s easily one of the best curls out there for developing the short head of the biceps. Be sure to go a little lighter than you typically would though.

Using a straight bar, grip the outside of the barbell so that your pinky fingers are aligned with the outside of the wider part of the rough section. Keep your elbows tucked in for this one so that your wrist placement on the bar is wider than your elbow placement on the pad. If you have elbow issues or weak wrists, be careful or avoid it altogether.

Super Supinated DB Single Arm Preacher Curl: If you want to really go heavy on biceps this is one of the greatest exercises out there. You can handle quite a bit of weight on this one, and since you can use your non-working hand to help with assisted reps, it makes it that much better. I’ll often go as heavy as 4 reps with single-arm dumbbell preachers, and I attribute a lot of my biceps development to these.

Word of caution: these are not full reps. Do not fully extend. You’re likely going to be working with a heavier weight than you’d be able to in most biceps lifts. And as stated above, the preacher bench can either be your biceps best friend or its executioner.

Although not technically part of the biceps, you can’t have awe-inspiring upper arms without building this muscle.

Without a solid brachialis, the arm looks scrawny when seen from the front and undefined from the side. Because of how it lays, developing the brachialis adds a clear separation between the triceps and the biceps, adding extra definition and shape to the arm.

DB Hammer Curl: These exercises are stellar for growing the biceps thickness and if performed with the repetition in line with your body — straightforward — then they’ll target some of your long head as well.

Where a lot of people go wrong is going too heavy. This is not an ego lift. While a little bit of loose form won’t hurt you, it can hinder your gains.

Cross Body Hammer Curl: This variation of the hammer curl is epic for directly attacking the brachialis. Do them strict, though. Curl the dumbbell inward to the center of your core, and slightly pronate the dumbbell as you do.

If you have trouble connecting with your brachialis (feeling the muscle), try placing the index and middle finger of your non-working hand on the brachialis.

Reverse Grip Barbell Preacher Curl: This is easily one of my favorite brachialis exercises. Probably because Larry Scott did them and he has arguably the best biceps ever. The only thing to be wary of is that if you already have wrist issues or have had a recent injury (like a bicep tear), then they can be truly brutal — and not in a good way.

Situate yourself on a preacher bench like you would a regular preacher curl. Hold the cambered bar on the outside curve. Perform a powerful positive, squeeze at the top, then perform a slow negative.

“Bang For Your Buck” Biceps Exercises

These are some biceps exercises that target your upper arms (Biceps/Brachialis) the same way a shotgun targets an incoming zombie. They absolutely belong in every biceps workout but if they’re the only exercises you’re doing, then you’re seriously missing out. I suggest doing 1-2 exercises to blast the upper arm and 2-3 to target them sniper style.

Barbell Cheat Curls: I won’t even bother explaining why these don’t directly target your biceps. More often than not, they target nothing but lower back and ego. However, when implemented intelligently, cheat curls can be a powerful tool in the arsenal.

To start, don’t do them like you’re doing “rack pulls.” Use your hips to help add extra power and momentum in that bottom half, then the top half of the rep should be mostly biceps. Squeeze at the top then lower the weight as slowly as possible to really focus on the negative.

Cambered Barbell Curls: The reason these aren’t perfect for isolation is the wrist position. When gripping a cambered bar, your grip is in limbo between pronation and supination so you’ll hit the brachialis and long head, but there won’t be direct targeting done, and if you use the wide grip curve than you’re also hitting some of the short head.

Do them with your back up against a wall to make them a stricter curl. Keep your elbows just slightly in front of the center of your waist. Don’t let them drift back or too far or forward.

Underhand Lat Pulldowns (or Chin-ups): Not technically a biceps exercise, but I love ending workouts with these or super-setting them with an isolation exercise like guillotine curls. They are effective for overloading the biceps with a weight you could likely never curl.

Fully stretch out at the top, pull slow and controlled to your clavicle, squeeze for a 2-second contraction, then slowly return to a fully stretched position.

The final and most important exercise is, of course, testing your biceps strength by curling your shaker cup and partaking from the nectar of the gods of gainz. After all, cheating on your supplements is worse even than cheating on your reps…in the squat rack.

The Supplements You Need

Since we have your back, for a limited time we’re offering some sweet freebies to go with your next purchase. Build your biceps without burning through your budget.

Just head on over to buckedup.com compile your master stack, use code: FEB2020 at checkout. Spend $50 for a variety pack of samplers. Spend $100 and receive a new t-shirt (you might want to buy a size up in preparation for that extra inch you’ll be packing around on your biceps). Spend $200 and we’ll upgrade you gym bag game.