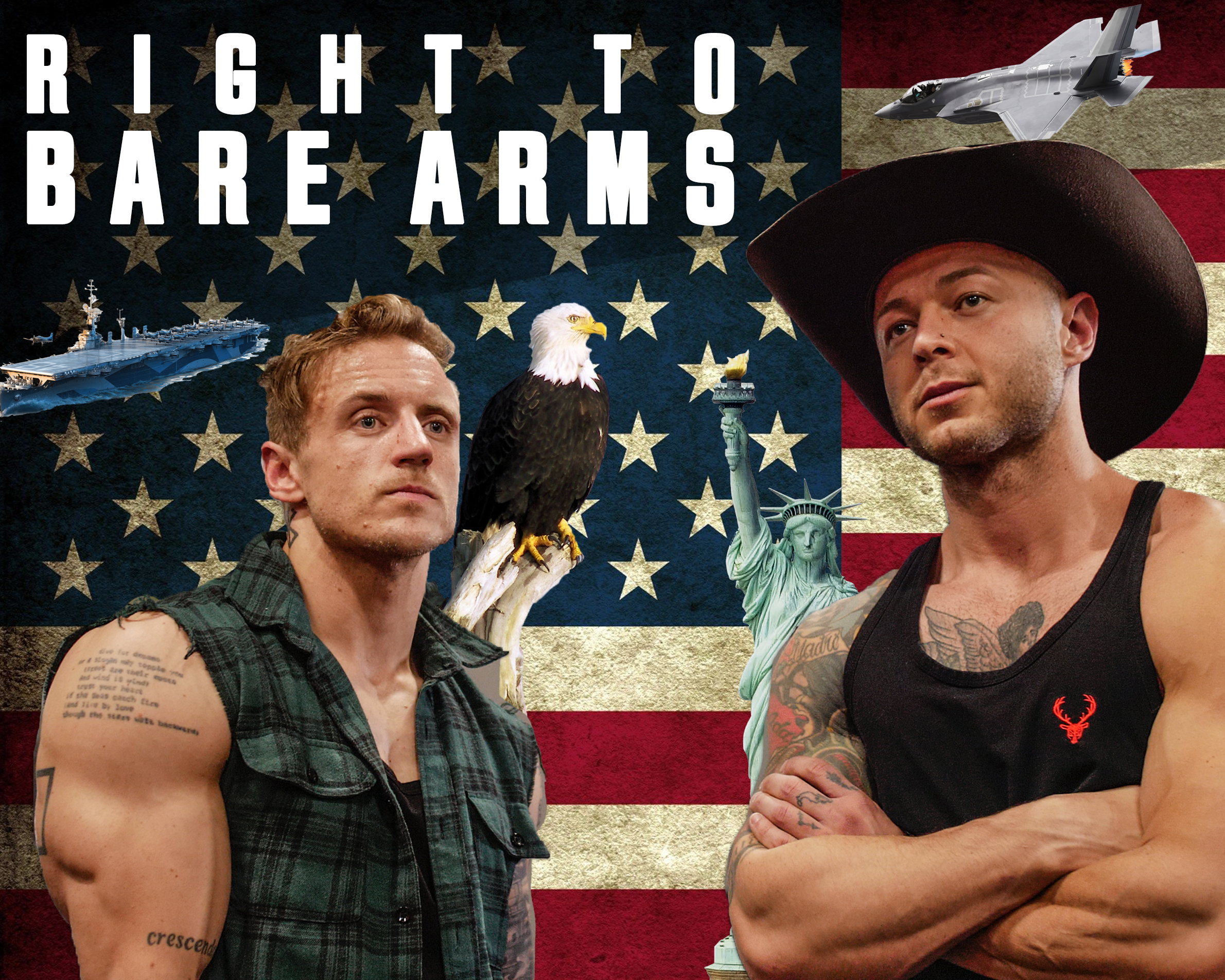 The Right To Bare Arms

You may not know this, but a recent study performed by a totally unbiased fictional Journal of Non-Medicine showed that Americans who lift weights — on average — have bigger upper arms than anyone else in the world. I know, shocking. Get these results from an arms workout. Correlation doesn’t equal causation, but my theory is that this strange anomaly is due to one thing: No gun regulations.

Sure, gun regulations might change the fact that we lead the world in gun-related deaths and mass shootings, but that’s a small price to pay for attaining glory. (Would Honest Abe have abolished slavery had Americans not had the right to bear arms?)

Really, what’s more important; the safety of civilians or the ability to attain a set of arms so massive they stretch t-shirt sleeves? Granted, most of those t-shirts are worn by guys who wear a size medium when they should wear a large, but that’s not important. What’s important is the effect on ego. There’s no feeling as gratifying as carrying around two PUMP-action shotguns — and by shotguns I mean my 18” arms.

All political statements aside, the real secret someone with massive arms has that others don’t is basic understanding of what we gun-toting, John Wayne worshipping meatheads call the “PUMP.”

You might think you know what the pump is and how it’s achieved, but…if you’re anything like most noobs, you’d be wrong. Don’t worry though. Despite what everyone in my life might tell you, I’m never wrong. That’s not true. I’m wrong about a lot of things — particularly anything related to political correctness — but if there’s any knowledge I’m armed to the teeth with, it’s the pump and an arms workout. (As I write this, I’m wearing a flannel shirt and listening to country, so you know I’m an expert on pumping guns.)

I’m assuming that if you’re reading this, you know what the pump is (and if you don’t, then you should), but I’ll explain it just in case.

In simple terms, the pump is that sensation you get repping out some barbell curls or cable triceps pressdowns. When your muscles expand to the point it feels like your skin might tear, and your veins look like tributary systems on a map.

The more sciency term is cell swelling. And, for all you nerds out there, here’s a rundown on how it works during a moderate to high rep set (8-30):

Veins taking blood out of working muscles are compressed by muscular contractions (i.e. forced into one space). Arteries continue delivering blood into working muscles, creating a buildup of intramuscular blood plasma. (Blood plasma is the pale yellow fluid of whole blood that consists of water and its dissolved constituents including especially proteins.) Blood plasma seeps out of capillaries and into the spaces between the blood vessels and the muscle cells. This creates an extracellular pressure gradient, which causes plasma to flood back into the muscle.

The result: the flooded blood pools in the working muscles with an arms workout, then said muscles swell.

If you’ve never experienced that flood during your workouts, it’s because you aren’t priming your body for a pump. In fact, it’s very possible your current pre-pump regimen is hindering your results. Continue to read to learn how to get your pump on for an arms workout.

It might not be rocket science, but it’s not broscience either. A lot of advice out there is about as worth listening to as a scrawny vegan claiming legumes build muscle as effectively as steak.  Two examples of this vegan-level bad advice — carbohydrate intake and caffeine.

We’ve all heard people claim that the reason you can’t get a pump is due to a lack of muscle glycogen. This claim is often followed up with a remarkably profound solution: “Bro, you just gotta carb up!”

If it were true, then I wouldn’t regularly have crazy pumps during my fasted workouts. Muscle glycogen does play a role, but the advice just isn’t sound. For one thing, muscle glycogen doesn’t necessarily require carbohydrates to be replenished (thank you, gluconeogenesis). More importantly, glycogen is only part of the equation when it comes to ultimate pumps. There are two other components equally if not more important:

Sadly, a good portion of the misinformation in the fitness industry comes from so-called experts who say only what their supplement sponsors suggest — profit over honesty, the American way.

I personally know a professional bodybuilder who pushes his sponsor’s pre-workout even though he doesn’t take the product due to its ingredient profile. According to him, it’s because their pre-workout is counter-productive for the pump. And it’s all because of one overdosed ingredient.

Caffeine’s Negative Effects On The Pump:

Don’t get me wrong, caffeine has its place in training. It can help with focus and deliver the energy needed to get those last few reps.

As effective as it is in those areas, it’s equally (if not more so) detrimental in other areas, specifically achieving maximal pumps. Remember those two other components I mentioned above? Well, bad news.

In other words, if there was a superhero named Vascular-Man, who drew his strength from getting a pump, then caffeine would be his version of a particular green rock…

Primed For The PUMP

All right. You know what you don’t need if you’re seeking a pump for an arms workout. Now let’s get into what you do need.

Vasodilation (Blood Flow) For The PUMP

What is vasodilation? Vasodilation is the relaxation of blood vessels. Relaxed blood vessels expand, allowing for more blood to flow through. This is of critical importance when it comes to getting a pump since the process of the pump requires oxygenated blood to flow as efficiently as possible.

Think about this way: We’ve all driven in rush hour traffic. Stop-and-go, jam-packed, wishing the city would just expand the four-lane freeway to six or better yet, invent flying cars already.

An arms workout is essentially rush hour. If your blood vessels are constricted it’s like a traffic jam. The nutrients are all trying to get to their destination — your muscles — but there aren’t enough lanes. Adding in a vasodilating supplement is the equivalent of adding in five more lanes to the freeway.

As previously stated, one of the pillars to build upon for a successful pump is hydration. This is one major reason why low sodium diets are absurd since sodium — in conjunction with potassium — plays a powerful role in hydration.

But why is hydration so important? Well, aside from the obvious performance aspects and general health, it’s unlikely cell swelling can occur if the environment (muscle cells) isn’t enriched.

Think about grapes and their dehydrated cousins, raisins. Raisins are for the most part just dried grapes. The dehydration process of raisins reduces the amount of moisture in the fruit from about 80% to 15% — about 4-5 times. Don’t get me wrong, I love raisin bran cereals, but as far as appearance goes…

Your muscles are similar. Being well-hydrated means greater blood volume and fluid to fill those veins and arteries. And, of course, amp up the PUMP.

Not saying I’d want someone telling me I got a glorious grape pump going, but I’d definitely prefer that over something like; “Bro, that pump is unreal! Your arms look like shriveled raisins!”

I’m technically a millennial. According to baby boomers, that means I’m lazy. I prefer the word effective, though. In every one of my endeavors, I try to think about how to outsmart my way to success, not outwork my way to it. What fun is success if I’m exhausted when I get there, especially with an arms workout?

I approach the pump with the exact same mindset. Sure, I could eat five cups of beets to improve my blood flow, follow it up with some fast food burgers and a sugary “sports drink” for the sodium and hydration component of pump achievement, but there are two problems with that approach:

That’s the beauty of Bucked Up’s purely pump focused supplement PUMP-OCALYPSE. It works quickly and effectively to help you start on the path to sleeve distension and muscle swelling.

How PUMP-OCALYPSE accomplishes such great feats is by supplying your body with the ingredients needed to meet the aforementioned requirements.

A Cellular Hydration cocktail consisting of two potent ingredients; GlycerPump and Betaine Anhydrous work synergistically to hyper hydrate the blood and tissues. A blood flow matrix — Citrulline, Arginine, Agmatine — to relax blood vessels and arteries so you can strut into your training session ready to confidently flex as if you had the right to bear arms.

And, just for a little bonus, we threw in Peak O2, a mushroom blend shown to improve strength over time. The only thing that compares to flexing big arms is lifting more than the shriveled raisin dude next to you. It’s like war — America’s specialty — you can’t just posture like you’re the biggest gym-goer, you gotta be able to back it up. Nuclear pump ftw.

Don’t Bring A Knife To A Gun Fight

Pump is the ammo before the trigger, before the powder, before the explosion. It is necessary for all chemical reactions. If you pull the trigger on the shotgun without pumping the shell in first, it’s pretty pointless. If there is nothing chambered your guns are worthless.

If there’s one thing I hold dear with my nationalistic hand over my heart it’s this: Life, liberty, and the pursuit of happiness. With PUMP-OCALYPSE and arms day-everyday, I’ve devised the perfect path for that pursuit. Epic pumps are the meaning of life. Sporting the biggest guns in the gym ensures liberty. Validation and compliments on my massive arms is the only key to true happiness.