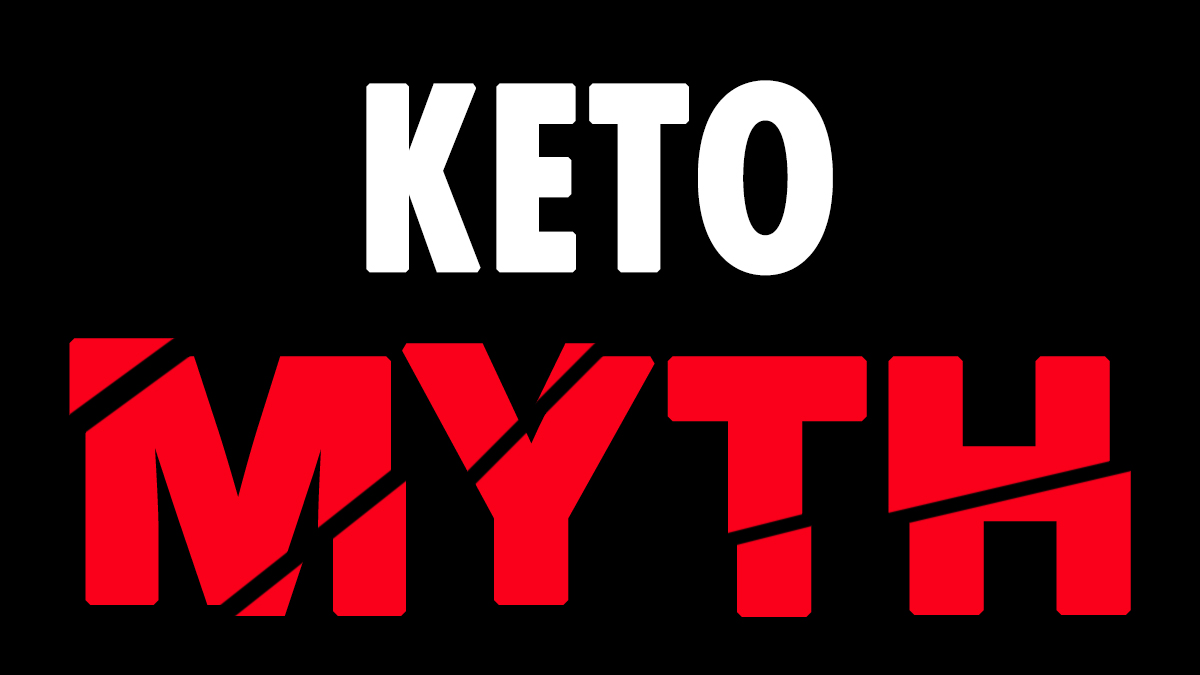 Nutritional Myths plague the fitness community, especially when it comes to keto. As far as I’m concerned though, myths belong in folklore and ancient texts — not in nutrition. Grab your goggles, because today we’re going to bust those myths Adam Savage/Jamie Hyneman style.

Many people turn to keto when other diets have failed them. Where a lot of those individuals go wrong is that they listen to their friends, family members, and the nutritionist who got a degree ten years ago — that maybe there haven’t been new updates or breakthroughs in science. Today I’ll explain what myths science has shattered.

Keto Myth #1: Keto is only good for Fat Loss

No one questions that keto is a great way to eat if you’re goal is to lose fat. What a lot of individuals do tend to question are the other benefits of going keto. Here are just a few:

I can already hear the haters out there throwing out objections to several of those points. Things like; “You can’t gain muscle on keto, you only cut with keto!” “I tried keto and I couldn’t focus!” and “Your body and brain run on glycogen! You’ll get sluggish.”

Please excuse me while I roll my eyes…in the direction of my 18” arms, which I didn’t even come close to growing until I switched over to Intermittent Fasting and the Mass-gainer’s Keto (it’s actually just modified keto but mass gainer’s keto sounds cooler). And as far as focus/energy go…I write between 10-12 hours a day then train afterward for 1-2 hours.

It’s often claimed that a VLCD (very low carb diet) such as keto causes a decrease in muscle mass. Some might suggest the reasons for this being:

Calorie deficit: this is not always true, nor does a caloric deficit in itself equate to loss of muscle mass so long as the necessary nutrient intake is met (nutrients and calories aren’t the same things, yo)

Gluconeogenesis: when the body takes amino acids — building blocks of protein — from muscle protein to maintain blood glucose. Also wrong. When your body switches over to using ketones for energy, interesting things happen. Since the liver can’t utilize ketone bodies, they flow into tissues such as the brain and muscle to be used for fuel. Ketones actually displace glucose utilization.

Utilizing ketone bodies actually spares muscle mass. (8) This is why I always suggest anyone who’s looking to build muscle — on keto or otherwise — throw some Exogenous Ketones into their pre-workout mix.

Keto Myth #3: Gluconeogenesis is your enemy

A lot of people who do keto are terrified of Gluconeogenesis. It’s a metabolic pathway that allows the liver and kidney to make glucose out of non-carb sources. It happens all the time, but the rate can decrease or increase.

It’s also the reason many people refuse to eat moderate to high protein — the idea being that if you intake too much protein gluconeogenesis will occur, spike your blood sugar through the ceiling, and kick you out of ketosis.

Here’s the thing. Our bodies need some glucose to survive. Yes, even those on keto. Certain parts of the body require glucose:

As such, your body will naturally find ways to make glucose (gluconeogenesis). This doesn’t mean that you’ve halted your ketosis. If your ketone levels stay elevated the parts of the system that can run on ketones will continue to do so.

In fact, studies have shown that people who are keto-adapted actually have a higher rate of gluconeogenesis. Despite this increase, people can still run on ketones without a problem. This is because when in keto, the glucose formed from gluconeogenesis isn’t used as the primary fuel. Instead, it’s used to:

Replenish glycogen stores is my focus here. Glycogen plays a powerful role in muscle recovery after workouts. Many people believe those glycogen stores can only be replenished via carbohydrates, but it’s just not true.

When you’re in ketosis, you run on a cleaner fuel source — ketones — so the glycogen gets stored for energy. It gets stored directly in the muscle. As such, excess glycogen for a ketoer only helps to promote muscle gain, and it doesn’t affect fat loss.(9)

Keto Myth #4: Keto is the best way to lose weight

Keto is not necessarily the best way to lose weight. Everyone is different. Keto excels in accelerated fat loss, but that does not mean it is the end all be all for fat loss. Despite what some keto gurus will claim.

Keto Myth #5: Everyone has the same Keto-Macro needs

One of my major problems with traditional “clean eating” diets and IIFYM is how simple they are. Clean eating ones look like cardboard cutout meal plans. IIFYM is often done using a calculator…a CALCULATOR. Both these ignore nutrient timing, thermogenesis, and a slew of other factors that go into successful dietary habits. Don’t fall into that trap with keto.

As a general rule of thumb, keep your fats high. That’s obvious. When it comes to carbs and protein, however, methods can and should vary per person (and time). This largely depends on your activity level, the intensity of your training, and your own goals.

If your main goal is the cognitive benefits and the overall health benefits — and you train with moderate intensity — it would likely be ideal for you to keep to the traditional macro percentages (75% fats, 20% protein, 5% carbs). The same goes for diabetics. If you’re in this category and you find yourself looking for the perfect meal replacement that won’t kick you out of ketosis and will help your cravings, Keto Protein is your new best friend.

If you train hard and physical gains — muscle and fat loss — are the ultimate goal, keep to tradition throughout the day, but increase protein post-workout (recovery, yo). With carbs, it comes down to experimentation. For athletes, I suggest implementing grass-fed whey protein like Buck Feed or the GOAT of workout supplements, ALL BULK NO BLOAT

Carb Example: A colleague of mine does yoga in the morning, then lifts at night. His carbs will get as high as 200g a day, and his blood levels still show him in ketosis more often than not.

Protein Example: I fast throughout the day, then eat my one meal post-workout around 6:00 PM. In this meal, I do lots of fatty meat, healthy fats, and veggies. When I say a lot of meat, I really do mean a lot. Like, 1-3 pounds. Does this kick me out of keto? Sure. But when I test myself the next morning, my results consistently show elevated ketone levels.

On rest days, I keep my carbs and protein low. When I do train but don’t fast, my carbs are very low and my protein is also pretty low, then I’ll increase protein post-workout.

There’s this weird belief out there that once you go keto you can’t go back. People stay that those who bounce in and out of keto can’t gain the same results as someone who’s never started keto in the first place. That’s like saying you shouldn’t ever start working out because if you ever stop — even for a week — you’ll get more out of shape than if you never started…

I agree. When you are in the process of keto-adaptation, you should adhere to the keto lifestyle as strictly as possible. Once you are adapted, however, you can — and should — bounce out of keto from time to time. After a cheat meal, those who are adapted can jump back into ketosis within the next 24 hours no problem.

Thirty minutes prior to doing your cheat meal, take Digestive Enzymes so you don’t have to deal with as much gut discomfort from the surplus of carbs you’re about to feast on

To speed up the process of jumping back into ketosis, drink some exogenous ketones the next morning. Exogenous ketones work like a feedback loop. They’ll pour ketones into your system and you will use those ketones until they are depleted. Your body craves the ketones since that’s the fuel it loves and reverts back to running off endogenous ketones.

And to help mitigate the effects of those simple carbs, drink some healthy fats like those found in MCT Oil Powder before bed. Mix in Collagen for some added benefits — muscle recovery, healthy skin, etc.

Just keep in mind, if you’re eating donuts every night, that’s not a cheat meal. That’s a daily habit. Cheat. But cheat smart and sparingly. You’ll be just fine.

Myth #7: All Fats are Created Equal — All Keto-Friendly Foods Are On the Menu

Just because you’ve made the switch to Keto doesn’t mean you can eat whatever fats are around. That’s like someone switching to veganism for health reasons then eating only Oreo’s because they’re vegan.

If you want to optimize keto, it’s important to recognize that eating Halo Top Keto Ice Cream or one of those frozen keto pizzas will not elicit the same results as 4 oz of organic boneless chicken thighs cooked in avocado oil.

Food rich in vitamins and minerals will deliver a vastly different result than one with little. Think grass-fed steak vs a lettuce wrap from Wendy’s. Both are technically beef, but one is packed with creatine, carnitine, and healthy fatty acids like Omega-3. The other…well…it’s fine in a pinch, but not ideal.

The effects of each food might vary. Let’s say you grab an Avocado and Skippy Natural peanut butter. Both are technically keto, but they’re not as similar as comparing two different kinds of beef.

Avocados are a superfood with proven benefits. These are just three:

Typical peanut butter — as delicious as it is — still contains sugar, is filled with unhealthy palm oil, and worst of all. Legend has it that peanut butter wasn’t created. It was conjured by four warlocks with the sole intention of creating a food impossible to stop eating.

Now that your quiver of informational arrows is filled, don’t be shy to fire away at anyone spouting misinformation. Never stop questioning and may your quest for knowledge be long and successful. If you want to know more about the benefits of keto, make sure to check out some of our other articles.

Protein on Keto: Ditch Your Ignorance