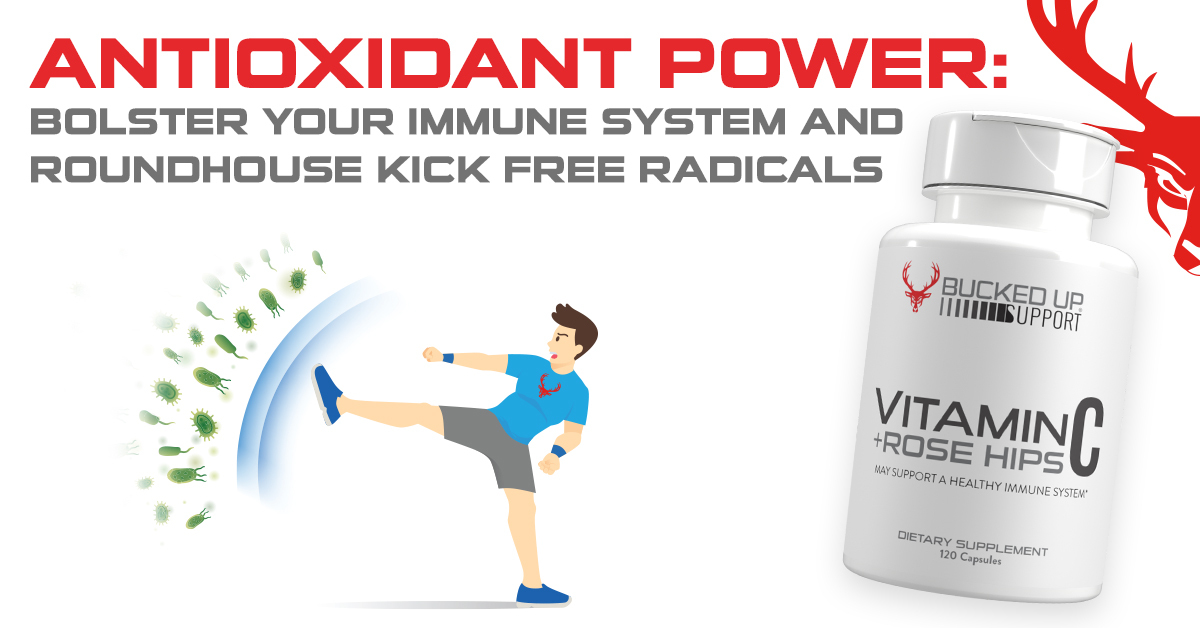 Here at Bucked Up, we have always had an east meets west mentality. Harnessing the best scientifically synthesized big pharma power, with the long-tested tried and true remedies that have withstood the test of multiple millennia.  Vitamin C + Rose Hips fuses those worlds together in the most harmonious . Like Donny and Marie fused a ’ country and a ’ rock n’ roll.

Most people know immune function plays a vital role in overall health. Where many go wrong is failing to plan an optimal strategy when it comes to their immune system’s defense. They’re playing checkers when Life is playing chess…with the same board found in Harry Potter And The Sorceror’s Stone. (It’s not fair, but Life often isn’t.) In this article, we’ll teach you how to replace every checker piece with Rooks, Knights, and Queens so you have the upper hand against Life (who still has to use pawns).

Nearly 200 years ago Louis Pasteur discovered the existence of invisible threats called “germs.” These germs were at constant war with our body, and our body in all its glory had its own army fighting off the invasion.

My grandpa (well not my grandpa, but grandpas in movies) always talked about fighting off either the commy or nazi “bastards” and how we won the war because our army was superior.

So how do we maximize our army and give them the best chance at winning the battle, let alone the war? I’m not a Hollywood grandpa, so I can’t pretend to know how to win a war against humans.

That being said, I do have some pretty impressive credentials: I’m currently undefeated in Stratego, I spent 6 weeks with mono in middle school and learned how to wreck any foe who dare oppose me in RTS games like Warcraft. And now, I pretend to be a scientist on the internet and YouTube message boards. All this has taught me three very valuable lessons:

We can all agree on that first part. So, let’s start with making sure you’ve got your kingdom (body) fortified to the max. To be honest, this part is pretty easy. These are three easy steps to bolster them.

But Buck, how do I manage stress with everything that’s going on? I went to the gym for stress! My stress now impacts my sleep! I don’t have any of the aforementioned tools anymore!

Good news. Stress management and quality sleep go hand in hand. So here’s what the expert (that’s me, in case you forgot) suggests: take a chill pill. I’ll make this even easier for you. We sell them. Go to the site and check it out.

Now that you’re back, let’s take a look at things in your control that you can do right now (well, after you finish reading, stay focused!)

Start with some type of home workout. We have videos and blogs for this. I know, I know, you miss your gym. We all do. But just remember, the gym is like church, it’s inside of you. You take it with you everywhere you go if you choose to. Why do you think they are called preacher curls?

Yes…I said it, do cardio. Sorry. It’s rough, I know. But there’s this thing called the lymphatic system and it plays a monolithic role in immune function. The problem with that is (brace yourself cardio haters): the lymphatic system doesn’t have a pump like the heart to force fluid and oxygenated nutrients through the vessels. It relies primarily on body movement and exercise. A sedentary lifestyle decreases lymph flow by a staggering 94%.

Powerlifters, take this opportunity to reevaluate what you consider exercising for health — 10 sets of 2-4 reps with 4 minutes of rest in between is performing movements, sure, but that doesn’t mean it’s helping your immune system.

This is doubly important if you’re in a high-risk area due to career, kids, or geographical location. Would it hurt to have a little extra protection? A little extra pea of mind?

Remember WarCraft, that Real-Time Strategy (RTS) game I mentioned earlier? Every once in a while, the game would throw a curveball and start you off only a few pixels — of unexplored darkness — away from those self-righteous Human do-gooders. (Yes, I always played as the Orcs.)

This would be considered a high-risk area. When that happened, fortifying your kingdom went from being important to mission-critical. Resources had to be poured into building the walls, then upgrading them, and then ensuring sentry towers were up and running.

Your immune system and how it correlates times/locations of living are no different. Occasionally (or often) the “campaign” Life has loaded for us forces us to change tactics. Staying active, eating healthy, quality sleep, and stress management are great. They’re noble, honorable, and usually enough.

But when the Alliance is right around the pixelated corner, that’s when you gotta swallow the pride, and enter in a real life cheat code like: VITAMIN-C-PLZ

Vitamin C is a water-soluble vitamin, which means you can not overdose on it! It packs a powerful antioxidant punch that helps fight free radicals that attack our cells. Keeping our free radicals at a minimum allows our body to allocate resources elsewhere, like sending defenses to the front lines to fight off bacteria and viral attacks.

Consuming a rich vitamin c diet is always recommended but it can be difficult to do this while not consuming tons of sugar. A small orange contains 9g of sugar and only 50mg of Vitamin C.  Studies have shown that high doses of vitamin c have great results in fighting it off and minimizing the symptoms of a cold. The ROI and risk vs reward on Vitamin C are as close to a biological free lunch as you can get.

Vitamin C is fantastic. That’s beyond obvious. It’s the upgraded fortification to the good work you’ve already put in to help keep your immune system functioning properly (to protect your body aka kingdom).

But we’re Bucked Up. You know us well enough by now to know that we don’t believe in simply defending. When I mentioned having an overpowered Elemental (in WarCraft) as an essential earlier, I wasn’t being facetious. An Elemental often makes a staggering difference in a game’s campaign.

That’s why we combined Rose Hips with Vitamin C.

And now that I’m done stretching metaphors hairline-fracture-thin… Rose Hips are part of the rose plant and one of the purest and most bioavailable forms of vitamin c nature has to offer. This all-natural source has been used in teas and traditional medicine since Jesus walked with the dinosaurs.

Rich in ellagic acid, lycopene, and phenols, three of nature’s most powerful antioxidants. These compounds have not only been shown to bolster the immune system by fighting free radicals, but have also provided some of the most promising research in the fight against the dark arts. Not saying that rose hips are the end all be all, but it can be the Elemental that turns the tide of war against those free-radical, oxidative stress inducing Alliance assholes.

Like a beautifully dubbed and star studded anime when you are feeling too lazy to read, synthesized and concentrated vitamin C stacked with the natural free flow form of rose hips, takes the best of both worlds to give you a multipronged defense system.

Using this east means west approach double covers you, it’s like having two health insurance packages…. But you know they aren’t here to screw you over and drain your bank accounts. They are just here to fight free radicals and inflammation*, not keep you on hold for 3 hours while they sinisterly laugh and eventually just tell you that you’re not covered.

Now this isn’t a miracle cure, we are just trying to maximize your odds. Like a pro gambler who knows when to hit and when to stand. There is no guarantee and we all have to play the odds, but that doesn’t mean the house has to always win.