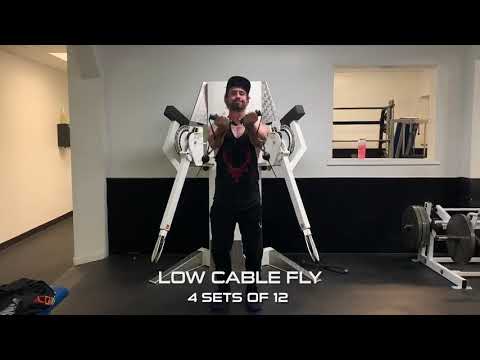 Coming at you this week with a killer chest workout designed to effectively target the pecs from every angle, and using a variety of rep ranges.

Variations of (and for) Success

You’ve probably been hitting chest for a while now. If you’re a guy reading this, you’ve probably been hitting chest for about two years longer than you have any other muscle group (except maybe biceps). And yet, there’s a strong chance your pecs still tend to slack off. If any of the following traits resonates with you, then you’re in the right place.

A few of these have to do with your body fat percentage, of course, but often times, even those with a low bodyfat percentage will still suffer from two or more of the aforementioned pectoral pride killers. (I say two, because let’s be honest, unless you’re a direct descendent of literally any DBZ character, your upper/inner chest isn’t anywhere near where you want)

This chest workout will provide some new variations to help you address those chest day struggles. And to start, you’ll have to cast aside your favorite exercise — the barbell bench press. Don’t get me wrong, it’s a staple for more reasons than just that it makes guys feel more “alpha”. I’m not a doctor so I won’t comment on how the barbell bench isn’t ideal for shoulder health, and can easily lead to other issues.

Instead, I’ll leave it at this: most people who rely on barbell bench for chest gainz are what professionals call “ego dominant”, which is eerily similar to being triceps or delt dominant, just those who suffer from ego dominance on chest day have a tendency to let it take over on all their power lifts, bench press especially. This can lead to a myriad of results, none of which have any correlation to aesthetic achievements.

The locked position the bench puts you in also makes it more difficult to get a strong contraction on the pecs. If we’re getting technical.

The great thing about the dumbbell flat press is that it closely mimics the regular barbell bench press — a staple exercise in every lifter’s routine — while forcing you to focus on stability to an extra degree because of having to wield the dumbbells. Another plus is you can more safely go to muscle failure without having to worry about a barbell falling on you.

For the sets and reps, you’ll be performing 4 sets of this exercise. The first set, pick a weight you can get twelve reps with, then work your way up in weight with each set. On the fourth set, perform the exercise using a weight that you can get 4-6 reps with.

4 sets — 12 each arm, then as many reps as possible with both arms

As a constant critic of how frequently people abuse the hammer strength decline machine, I have to give kudos to Tyler for his variation. Typically, lifters treat this particular machine like it’s something they’ll be putting into the powerlifting records, which is (predictably) why those same individuals don’t develop that nice, clean lower pec sweep.

Tyler’s variation requires decreasing the weight, allowing you to further focus on targeting the lower pecs.

In the golden age of bodybuilding, the dumbbell pullover was considered a staple exercise. This is because of how it works to expand the ribcage, giving the illusion of a broader chest. It can also create a great stretch for the pecs and, if switched up a bit, the lats as well. With all these benefits, it’s no wonder that anyone seeking a fantastic V-taper aesthetic would be sure to incorporate the pullover into their routine.

One thing to note is that you need to be sure your shoulders are healthy and you aren’t overloading them with weight in this movement, or going further than your level of mobility would allow.

The single arm cross-chest low cable fly (or single arm low-to-high crossover) is very similar to the low-to-high crossovers performed earlier in this workout. Where the single arm movement excels is that you can get a greater range of motion with it, specifically near the top of the movement, allowing you to bring the cable attachment further across the center line of the pecs and increasing the strength of contraction. Additionally, since it’s a single arm movement, you can put more focus into each side, which can help improve symmetry.

4 sets of 12 reps followed by push ups to failure

The dumbbell incline press might just be one of the greatest exercises for anyone who wants a well-developed and proportioned chest. Since most people struggle with building the upper chest in general, it’s never a bad idea to dedicate up to even 70% of your exercises to upper chest on any given press day. Maybe even more. For any regular readers, you know I’m a Serge Nubret fan boy. He would do chest days a week, and one of those days would be entirely dedicated to upper chest.

Although barbell incline has its place in any lifter’s routine, there are definitely some advantages to using dumbbells instead. Obviously it’s easier to ensure both sides of the body are being effectively recruited with dumbbell exercises, but one of the other benefits is that the incline benches that are attached to a barbell rack are locked at one angle. This is fine, but an adjustable incline bench allows you to switch up your angles so that you can vary between slightly incline to a super incline.

Some people might disagree with performing super incline presses for targeting the upper pecs as they believe this angle will target the front delts more too much, but speaking from personal experience, I’ve found that adding in some steeper incline presses greatly improves upper chest development.

Nor am I the only one. Charles Glass, considered one of the greatest bodybuilding coaches currently in the industry, prefers to include higher inclines. And even more convincingly, Frank Zane would regularly perform dumbbell incline presses by starting at a steep incline then switching up the level each set.

Super setting with the push-ups ensures that you’re taking the muscles to failure and then beyond. Plus, ending a workout with push-ups is a fantastic way to measure if you’ve gone hard enough during your workout — if you can get more than twenty push-ups at the end of a chest day, you haven’t gone hard enough. At least, that’s how I justify it to myself.