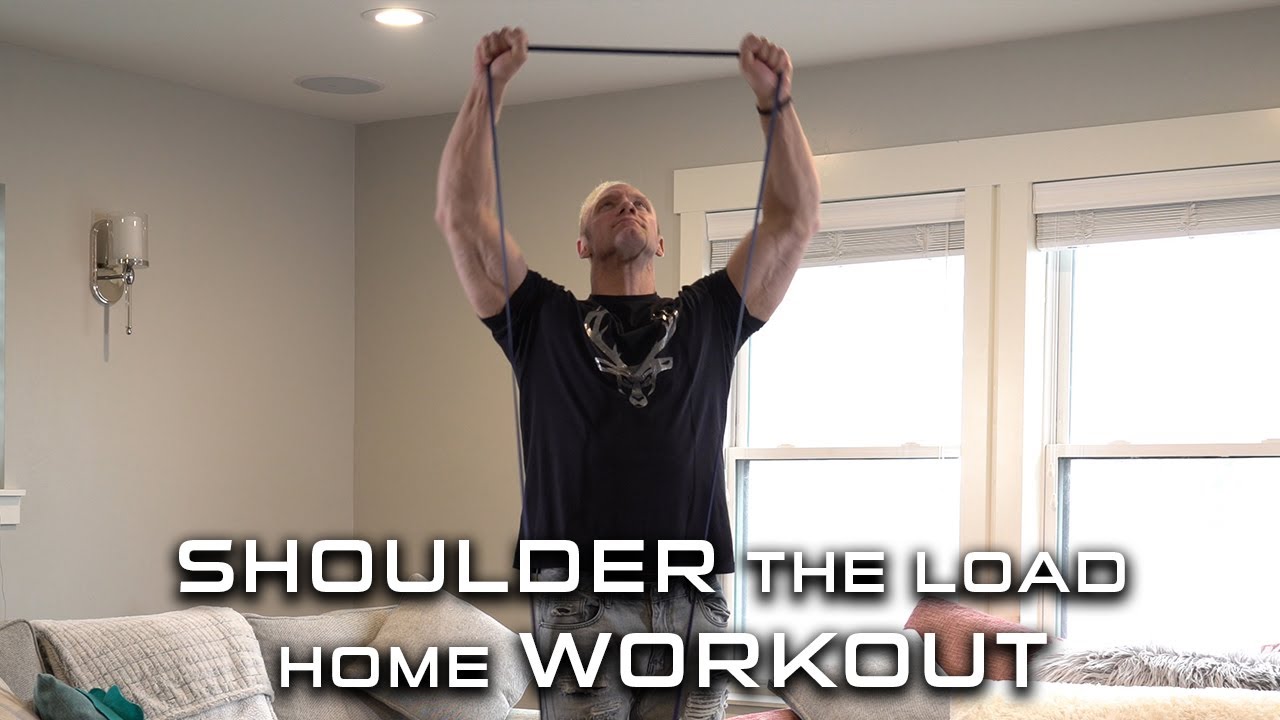 This article is all about how to target the deltoids from the comfort of your own home. Spring is just around the corner, which means tank tops will be back on the wardrobe menu. Nothing says aesthetics like sporting a pair of round, defined deltoids.

The title of this workout is Shoulder The Load. Why? Because fitness isn’t just about how much weight you can push or pull. Fitness is an all-encompassing term. Physical, mental, etc. The fitness community bands together and helps one another out. Sometimes you might have to shoulder the load for a loved one, and other times they might have to do the same for you.

This shoulder workout will target all heads of the deltoid using bodyweight and resistance bands. It’s all about endurance, how long you can shoulder the load, and withstand resistance.

Shoulder press has been a staple in every lifter’s routine for pretty much ever, and it always will be. By now it’s no secret that to develop round shoulders, you need this exercise in your arsenal.

Want width? Want that nice sexy cap separating your upper arm from your shoulder? A well developed medial head on the deltoid is one of the first things anyone notices in summer. If you have any desire to wear tank tops outside, start prioritizing the medial head.

Bonus: After completing the exercise on both arms, repeat the exercise without any rest. Count this as one set. You’ll get a solid burn and pump once by the time you move on to the next exercise.

So you can do eight push-ups without stopping. Good for you. No one cares. If you actually want to impress people, you either have to break into the triple digits for single set push-ups. Or better yet, get good at handstand push-ups. They help round out the shoulders, require core strength, and hold the power to level up your apparent badassery.

The Upright Row is a great movement for hitting every head of the deltoid as well as the traps. Switching up angles to create a variety makes it even more versatile. Resistance band upright rows have an advantage over regular upright rows due to the ability to not have your wrists in a locked position (as is the case with barbell upright rows). Still, if you do have a history with shoulder impingement or wrist injuries, probably avoid this one.

Well-developed rear delts are the equivalent of a medal of honor when it comes to lifting. They’re the way to notify anyone who sees you from behind that you know what you’re doing, and you sculpt your physique with attention to detail — as opposed to being a mass monster or a glute princess. The resistance band reverse fly is a useful tool even when you have access to a gym as you experience the most strain at the top of the movement, allowing for a better contraction.

What’s the best exercise to hit my upper back? If you’re not using resistance bands, throw some Bent Over Barbell Rows or T-Bar Rows into your routine. Otherwise, check out our resistance band workout for back.

What’s the best bodyweight exercise for chest? It’s up for debate, but sticking to the staples is always a good option. Throw in dips, push-ups, and incline push-ups. We give some examples in this article. Learn how to do a kneeling barbell roll out.