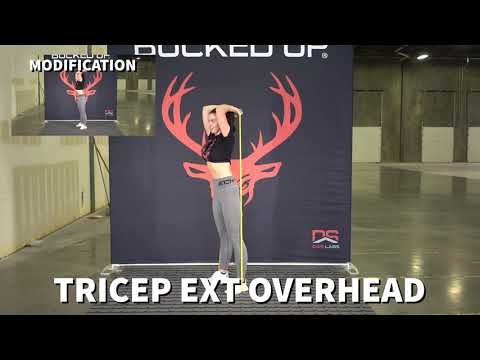 In today’s article, we’ll be following along with Jessi Kate as she walks you through an upper body resistance band workout. This workout will effectively target just about every muscle group in the upper body, and even a little lower body as well.

If you find yourself rushed, or you’re having trouble deciding how to split up your muscle groups, then this is perfect. The workout requires very little time, and takes out the having to decide part, since you’re hitting everything. The only part of your workout that should fatigue you is the actual working out, not the decisions.

The biceps curl might not be the most impressively esoteric exercise out there, but it is the foundation for anyone who wants to look good in t-shirts. Whether your goal is to have magical orbs resting under the skin or you simply want defined arms, you gotta throw in some curls.

The overhead press and the traditional squat are staples in every exerciser’s routine, for both overall muscle development and athletic performance. Combining them into a single movement is an effective way to improve coordination, as well as increase heart rate to keep those fat stores burning at a greater rate.

The triceps make up ⅔ of your upper arm. So, if your aim is to attain bigger overall arms, then neglecting the triceps is an incredibly silly decision — one people make all too often. And if you’re a female who wants sexy, defined arms, hitting the triceps is even more important, since women tend to store fat in their arms more often than men do, and it’s usually around the triceps that this happens. Not saying you can effectively spot-reduce fat, but building up muscle in that area definitely makes a difference in the aesthetics of the upper arm.

Anatomically, the triceps are made up of three ‘heads;’ the long head, the medial head, and the lateral head. Most people spend their time on exercises such as triceps pressdowns or skull crushers, because that’s what they know, but those exercises aren’t that effective for hitting the largest head of the triceps muscle — the long head. The overhead extension is hands down one of the greatest triceps exercises in that it optimally targets the long head, adding shape and definition to a part of the arm that’s all too often neglected.

Modifications: No band, lighter band, use an overhand grip

An effective way to target the traps as well as the deltoids, specifically the anterior (or front) deltoid, the upright row gets a bad reputation because of how frequently lifters perform it incorrectly. This typically occurs due to most people’s largest muscle group — ego. They put weight before form, which can lead to wrist pain, as well as rotator cuff issues. However, when done properly, the upright row is a fantastic way to build that glorious v-taper we all want. Also adds definition, which is obviously cool.

There’s nothing I can say about the pushup that hasn’t been said an infinite amount of times before. Adding the resistance band is an easy and effective way to increase the difficulty of this tried-and-true exercise.

Modifications: No resistance band, or push-ups from your knees

Looking for a workout for legs? Check our this dumbbell leg workout.